First things first, the reason why mountain climbing ropes are used when traversing a mountain is because of its sheer ability to absorb a fall’s force. For a good rope to be able to do this, they must have the ability to stretch. This skill is named a rope’s dynamic quality.

The fact of the matter is that ropes – under force of impact – stretch yet at the same time still remain static despite under a heavy load. Believe it or not, there is an institution called the UIAA, which offers a test standard for mountain climbing ropes.

The Union Internationale des Associations d’Alpinisme (UIAA) is the international mountaineering and climbing federation that creates safety standards to which all climbing ropes must adhere. Independent labs are responsible for carrying out the tests. All the ropes we recommend are certified by the UIAA.

The packaging on dynamic climbing ropes lists the test results for UIAA safety standards, including fall rating, static elongation, dynamic elongation and impact force. Looking at these ratings while thinking about what type of climbing you will be doing can help you choose a rope.

One of the standards of such an institution for a rope to pass is that they must not be able to break after five fall tests with an impact of 12kN force. Various ropes are produced to be able to conform to certain specifications.

HALF ROPE AND SINGLE ROPE TEST:

The half mountain climbing rope test is where a particular object weighing fifty five kg is then dropped from a height of almost five meters. The rope measures 2.5 m and should be able to not break and still hold the object.

The single mountain climbing rope test is where the same length of rope is used with an object weighing eighty kilograms and is dropped from a height of almost five meters.

PASS THE FORCE OF IMPACT TEST:

Determined in this test is the force amount a rope could stand.

Impact force is the amount of force in kilonewtons that is put on the falling weight during the first UIAA fall. A lower number indicates less force on the falling climber, the belayer and the gear. The higher the dynamic elongation, the lower the impact force.

Lower impact forces make for a soft landing on the rope when you fall, but with that usually comes greater stretch, which can be less efficient when top roping.

There are two types of elongation test: Static and Dynamic

Dynamic elongation is the distance the rope stretches during the first UIAA fall. Higher elongation equals a longer fall, so generally speaking, a lower number is better because less stretch may prevent a falling climber from hitting a ledge or the ground. However, less dynamic elongation means a higher impact force on the climber, belayer and gear. The UIAA allows ropes to stretch no more than 40 percent of the length of the entire rope.

The UIAA tests ropes to see how many falls they can hold before failing. Lab falls create much greater force than most real-world climbing falls. Therefore, the fall rating is mostly a comparative value.

This is where an object weighing 80 kg is tied to a 2.8 m rope and dropped from a five meter height. This is repeated until the mountain climbing rope breaks. A total of five falls is needed and the rope should be able to survive such in order to pass.

All ropes that meet the UIAA fall rating standard are safe for climbing. A rope with a higher fall rating may mean that that rope will last longer than a rope with a lower rating. However, always (and we cannot repeat that enough) inspect your rope closely after a severe fall and consider retiring it if any sort damage is detected.

All in all, a good mountain climbing rope is out there. Seek and find only the best. 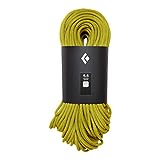 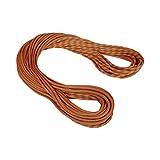